skip to main | skip to sidebar

Abominable
This was completed as part of the 8 month Digital Animation program at Capilano University. It was a very intensive course and I'm surprised I manage to learn all the necessary skills to actually make a film in that short amount of time.
Due to my previous experience in 2D animation, I was able to design, storyboard and animate this with maybe a bit less pain than without it. This allowed me to focus on getting the modelling, textures/shaders, lighting and rigging right. The faculty there was very helpful in making sure that the project was setup for success rather than for failure.
Documentary
This was the traditionally animated film that I did as part of the Classical Animation program at Vancouver Film School. I came to this school already being a Fine Arts major in painting and drawing but quickly realised I still had a lot to learn in visual art. Although I gained a fundamental understanding of the principles of animation there, I also learned new things about drawing and design.
The best thing about the program at VFS was its emphasis on storytelling and actually making a finished film. With inspirational faculty like Marv Newland, Moose Pagan, Wayne Morris and Dieter Mueller that focused on the art rather than the commercial, I really gained a strong appreciation for the unconventional short film.
Of course, the look of my film ended up being pretty conventional. Haha.
Posted by Lawrence at 12:53 AM No comments: 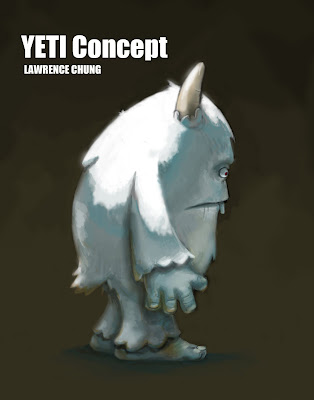 Looking out to sea 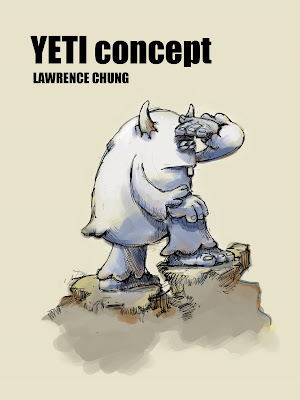 Posted by Lawrence at 4:55 PM No comments: 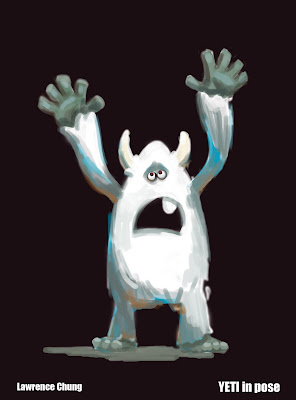 Posted by Lawrence at 4:54 PM No comments: 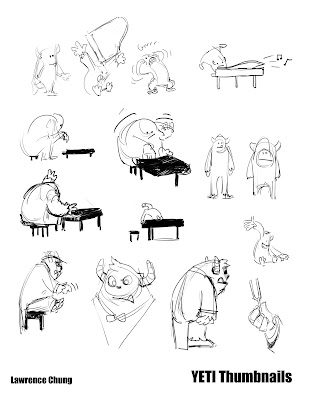 Some design ideas for the Yeti 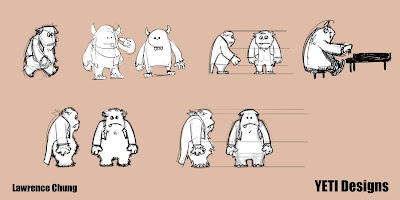 Posted by Lawrence at 4:47 PM No comments:

This was my animation to dialogue assignment from my first term. I know, it needs a bit of work and is kind of boring. :) Originally I was gonna have a mini-him walk up to the desk beside his "dad" holding a present. I decided to move on and try something else.
I'm not sure where the audio came from, but apparently it was used as an 11 Second Club clip once. I just yanked it off the server at school.
Posted by Lawrence at 1:25 AM No comments:

Abominable from Lawrence Chung on Vimeo.

We had around 4 months to do our final project from start to end. I decided to make a little film. Storyboards. Designs. Modelling. Rigging. Animation. Lighting. Rendering.

Just finished my 8 months of 3D animation at Capilano University. The grad "party" last night was fun, but I'm paying for it now.... Lots of stuff will be posted here by the end of the weekend, including my new film! Stay tuned. :)
Posted by Lawrence at 10:28 AM No comments: